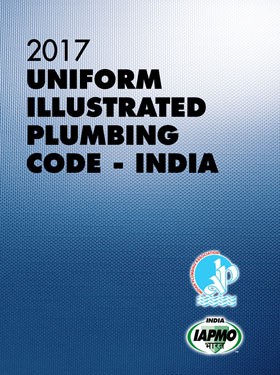 The Uniform Illustrated Plumbing Code-India (UIPC-I) is a product of the joint effort of the Indian Plumbing Association (IPA) and International Association of Plumbing & Mechanical Officials (IAPMO), with world headquarters in USA.

The first edition of the Uniform Plumbing Code (UPC) in North America was officially adopted by IAPMO in 1945, based on the recommendations of the committee comprising of plumbing inspectors, master and journeyman plumbers, sanitary and mechanical engineers, public utility companies and the plumbing industry. Since then, the code has gone through consensus development, mitigating the disorder in the industry as a result of widely divergent plumbing practices and the use of many different and often conflicting plumbing codes.

The rapid development of the Indian Construction Industry in the past decade required the plumbing industry to keep pace with modern plumbing technology. For this, the codes, standards and practices required improvements to be comparable to international standards. The basic document for plumbing, which can be considered as uniform throughout India, is one part in the National Building Code of the Bureau of Indian Standards, implementation of which is voluntary, until adopted by local statutory bodies.

With intent to incorporate and implement the latest technology and systems for the protection of public health and hygiene and bring uniformity to the installation of plumbing works throughout the country, IPA has ventured into the preparation of a uniform code, applicable all over India.

The modified UPC-I has kept all basic principles of the original UPC intact but edited to suit the Indian laws, conditions and accepted good engineering practices. The UPC-I has been designed to provide a lucid, comprehensive technical reference to the citizens of India for safe plumbing practices and at the same time allowing latitude for innovation and introduction of new technology.

The UPC-I has been prepared by the Technical Committee comprising of some of the eminent Consultants, Project Managers, Academicians, Contractors and Manufacturers in the country, specially formed for this purpose by the IPA. The UPC-I was first published in 2008 and it is IPA’s intention to revise, update and re-publish this document at regular intervals in the future. The 2011 UPC-I is based on the 2009 version of the Uniform Plumbing Code. The latest 2017 Uniform Illustrated Plumbing Code - India (UIPC-I) is a reaffirmed version of the 2014 UIPC-I with further amendments by the IPA, its Technical Committee and IAPMO India. 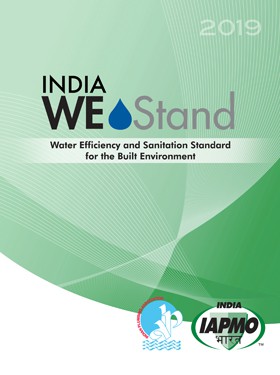 Based on the water provisions within IAPMO’s 2015 Green Plumbing and Mechanical Code Supplement (GPMCS) and 2013 Green Plumbing Code Supplement-India, this standard draws on core competency and industry expertise in building water systems for the purpose of providing comprehensive requirements to optimize water use practices attributed to the built environment while maintaining protection of the public health, safety and welfare. The need for WE- Stand is in recognition that with increasing demand, constrained infrastructure and supplies, and pervasive droughts globally, there is a critical need to reduce water consumption attributed to the built environment through conservation and reuse. This standard helps in reducing the risks to public health, safety, and building systems performance. 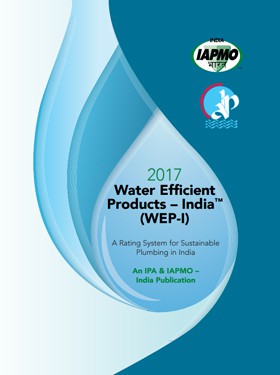 Rapid development of the Indian Construction Industry in the last decade required the plumbing industry to keep pace with modern plumbing technology. In order to achieve this, the codes, standards and practices needed to be improved, to be comparable to international standards.

WEP-I is a Rating System for Sustainable Plumbing in India. The increasing need for defining water efficient products in India prompted IPA’s Technical Committee (TC) to develop such a document in collaboration with IAPMO-India. Prior to 2011 Water Efficient Products-India (WEP-I), no rating system for water efficient products existed in India. The WEP-I was first published in 2011 and revised in 2013.

The revised 2017 WEP-I is a set of recommendations to all those who are involved in the design, engineering, manufacturing, selection, installation and maintenance of water efficient plumbing products in India. As of the date of publication of 2017 WEP-I, the provisions in this Code are not mandatory. The use of WEP-I is intended to encourage use of water efficient products, to incorporate and implement the latest technologies and systems and provide uniformity in the performance of products.

The Code references in this publication are taken from the 2017 Uniform Illustrated Plumbing Code-India (UIPC-I) and 2013 Green Plumbing Code Supplement-India (GPCS-I). WEP-I has been prepared jointly by IAPMO-India and the Technical Committee (TC) of IPA comprising of some of the eminent Consultants, Academicians, Project Managers, Contractors and Manufacturers in the country. TC has been supported in this endeavour by other leading professionals in the industry. IPA and IAPMO-India thank all those involved in the process, especially for the following supporting statements from the green rating organisations such as ADaRSH (part of GRIHA, Green Rating for Integrated habitat Assessment), IGBC (Indian Green Building Council) and USGBC (U.S. Green Building Council) respectively 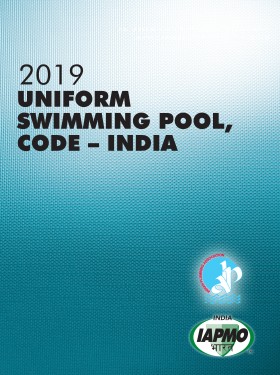 To incorporate and implement the latest technology and systems for the swimming pools, spa and hot tubs and to bring uniformity to its installation throughout the country, IPA has ventured into the preparation of the Uniform Swimming Pool Code-India (USPC-I), to be applicable all over the country. The USPC-I has been designed to provide a lucid, comprehensive technical reference to the citizens of India for good practices and at the same time allowing latitude for innovation and introduction of new technology. The use of this document is intended to provide functional swimming pools with minimum regulations. This Code provides recommendatory guidelines for minimum requirements and standards for the protection of the health and safety of users. 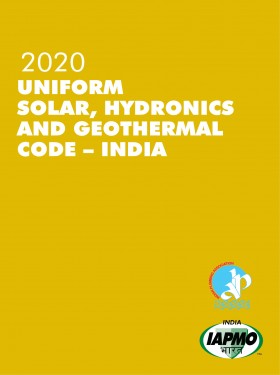 The overall development of India and the resultant perennial shortage of energy has necessitated identification of renewable energy sources. Solar energy has been universally recognized as an economical and viable source. Codes and practices of international standards needed to be established in the country for manufacturing and installation of solar energy products and systems. The USEC-I has been designed to provide a lucid, comprehensive technical reference and at the same time allowing latitude for innovation and introduction of new technology. Other publications from the Bureau of Indian Standards and Ministry of New and Renewable Energy may also be referred as applicable.